From the moment they emerged from their creator’s imagination, many fictional characters have shaped history as surely as did real-life warriors, statesmen, and philosophers. The Fictional 100 not only identifies those characters who have most influenced world literature, but also ranks them, judging each by his or her impact on literary history as well as popular culture.

From the brash Hercules (16) to the troubled, outspoken Holden Caulfield (99), from the menacing plots of Medea (26) to the misguided schemes of Emma (70), The Fictional 100 runs the gamut of heroes and villains, young and old, saints and sinners—their sagas including some of the most romantic and scandalous love stories ever told, as well as some of the most traumatic and passionate “endings” (fourteen of the one hundred committed suicide, and seven were murdered).

Some characters held a mirror to their society and catalyzed great changes. Harriet Beecher Stowe’s Uncle Tom (82), for example, brought home the suffering of black slaves to many white Americans for the first time, and the novel is often credited with starting the Civil War. Others had “lives” so distinctive, or came to embody a principle so completely, that their names became part of our very language. Think of words and phrases such as: quixotic, Oedipus complex, Achilles’ heel, a real Don Juan, or the patience of Job.

Including such varied luminaries as Hamlet (1), Genji (5), Chia Pao-yü (8), Arjuna (10), Scheherazade (13), Romeo (23), Juliet (24), Frankenstein (33), Jean Valjean (34), Shakuntala (63), Superman (80), and Colonel Aureliano Buendía (97), this groundbreaking book offers a multicultural tour of literature’s most intriguing characters to reveal a common thread of humanity throughout the works that contain them.

The Fictional 100 presents one of the strongest collections of literary characters enclosed in a single work, serving as a reference for lovers of the classics, a source of debate for critics, and a guide for those curious about the canon of great world literature.

What you will find about each character 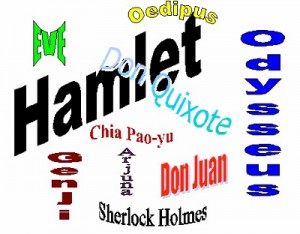 The Top 10 Characters. Visit my recommended reading list for them at Flashlight Worthy Books.

The Fictional 100 offers–in short, readable chapters–the triumphs and tragedies, romantic escapades, and adventures of the most interesting people in world literature and legend. Each chapter begins with an epigraph in the character’s own words, which reveal something of each one’s unique style and personality, starting with the famous “To be, or not to be” from the brooding Hamlet. Then each character’s “life story” is recounted, typically emerging in one or more key works of literature, but often continuing to evolve in music, film, and other literary works far removed from the character’s time and place of origin. Consider, for example, Jane Austen’s Emma transplanted to Beverly Hills in the film “Clueless,” Homer’s Odysseus making the rounds of twentieth-century Dublin in James Joyce’s “Ulysses,” or Mary Shelley’s Dr. Frankenstein strutting on stage as Dr. Frank-N-Furter in “The Rocky Horror Picture Show.”

Students will find a ready resource for their research needs, from biblical and Arthurian legends to Shakespeare and the chief figures of the modern novel. The Fictional 100 compiles a wide selection of critical responses to each character, spanning numerous works and varied media.

Many characters’ stories are accompanied by a classic illustration or a photo of a landmark portrayal–for instance, a theatre poster of William Gillette, who brought Sherlock Holmes (9) to the stage, or a movie still of Mary Martin as Peter Pan (76). Finally, a rich list of references enables the reader to pursue a “face-to-face” encounter with any of these intriguing characters through the most accessible literary sources.

The Fictional 100 selects the most enduring and compelling characters from six continents, and traces the reasons for their unique appeal, which may lie in a deep psychological or mythic resonance, the artistry of their presentation, or the special circumstances of time and society that brought them into being and sustain their popularity.

Besides American and European characters–such as Huckleberry Finn (31), Alice (25), Jane Eyre (61), David Copperfield (72), Scrooge (73), Madame Bovary (37), Anna Karenina (53), the Brothers Karamazov (64,65,66)–familiar to readers in these traditions, the greatest fictional personages from Latin America, China, Japan, India, Africa, and Australia are represented. For example, it includes not only Romeo (23) and Juliet (24), but also the “Romeo and Juliet” of Japan, Tokubei (44) and Ohatsu (45), whose story, though less well-known internationally, is as tragic and affecting as their European counterparts’. There is not only Achilles (14) of ancient Greece, but also Arjuna (10) of ancient India. Evidence of both the depth and breadth of each character’s influence around the world is presented to support his or her ranking on the list. Readers should enjoy seeing how their favorites stack up in the worldwide competition across time and cultures. Sherlock Holmes (9), Cinderella (40), Captain Ahab (62), Dr. Jekyll/Mr. Hyde (67), Dorothy Gale (83), and Tarzan (90) are all there.

This book will enable the reader to consider not only the great variety among these characters, but also the range of features they share across cultural boundaries. For example, one recurring type, the “Trickster,” has appeared in multiple guises in Europe (Odysseus [2], Don Juan [7], Hercules [16]), Africa (Hlakanyana [39]), and among North American Indians (Wakdjunkaga [46]).

From Hamlet (1) to Toni Morrison’s Beloved (100), this book makes it easy for readers to sample humanity’s best loved and most provocative fictional lives.